General help and technical troubleshooting. Ask for help here if you can't find an answer in the FAQ.
Post Reply
462 posts

Death_Reaper56 wrote: ↑
Tue Nov 24, 2020 11:12 pm
Remove New California and that patch.No matter what that mod author says,the two will never be able to work together,patch or no.

It's not an issue with New California. I only recently added New California, I did a fresh install of TTW and all my other mods, then added F:NC. I had this bug before, in my previous load order. I can 110% say it's not F:NC, the bug still appears in the game without even having F:NC on my system.
Top

Go back over the install instructions and make sure you haven't missed a step. Make sure TTW is working, THEN add your mods.
Top

Thank you for the response, I'll give it a try.
Top

Razbors wrote: ↑
Tue Nov 24, 2020 4:41 pm
Hi,
I'm having an issue where the interior of Washington Monument Top is bugging out, all I can see is landscape. No interior, and my character is at ground level. If I fly up I can see a few bits of clutter hovering. The lobby is fine, can take the elevator up. I've disabled all plugins except essentials and the problem persists. I saw an issue where NMC texture pack was mentioned to be messing with the Washington Monument mesh or texture itself. I've checked in GECK, and the cell (and the floor, clutter, everything) is visible and fine. Would anyone be able to throw their 2 cents in to help me troubleshoot this please? It would be greatly appreciated

Fresh reinstalled FNV, then TTW + both updates, problem didn't persist at this point. Then F:NC and other mods, problem persists even with no plugins enabled. Narrowed down the culpret, FNVLODGen. Thanks for the help.
Top

RoyBatty wrote: ↑
Tue Nov 13, 2018 10:54 am
Never seen the hanging wrist thing except one cell (Presidential Metro) with the Reavers, this is a vanilla bug in F3/NV.

This is pretty much what I wanted to describe in my post above, I didn't know that was a thing^^ I encountered this behavior three times now, once inside the Springvale school and twice in the Super-Duper Mart, both at the same spot (killed those raiders shortly after each other).

The unresponsive mouse in the menus is my biggest problem, since it happens regularly and I can't seem to find out what behavior causes. I have no proof yet, but I think it might happen when I use my pip-boy to access the apparel or armor tab. I noticed that when the mouse bugs out, I can still click the three big buttons of the pip-boy, maybe that helps to identify the problem.

I also have this wrist hanging bug, it also causes meshes to stretch out and the pinball effect of bodies shaking around.
It doesn't matter where the body dies, it just hangs itself up in mid-air.

Also, I found a bug at the terminal to open the safe in the Generator Room in the Columbus Circle Union Station, the one around the corner where the safe is in the floor.
The bug is a type-o, whereas the word "MUTANTS" is misspelled as "MUTATNTS". (Lower left corner for reference.) 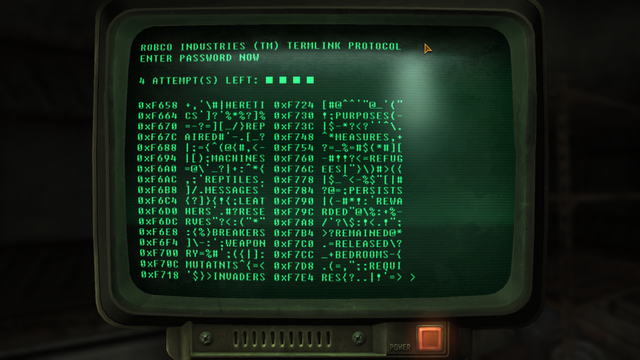 Other bugs I have are Butch standing behind the bar in the Muddy Rudder (prior to Trouble At The Homefront, however it's the same Butch from that questline, you can also get a haircut from him) and Nathan (Megaton) running around scared getting shot at in the hallways of Raven Rock Level 3 for some reason.

I also can not talk to Bartering Scavengers, and also can not speak to Dr. Barrows nor his assistant, and a lot of other NPCs after completing various quests, such as Reilly's Rangers for example. Omegle Tv Upon spesking to them, the screen just zooms in and out shortly, and then the game moves on.

Also, upon starting in the Capital Wasteland and moving to New Vegas results in all weapons and ometv armors/clothing losing most of their Durability.

When using Companion Share And Recruit, you can not bring the Lyon's Paladins from Galaxy News Radio with you on the train, or otherwise you will get teleported to a small room without lighting and get stuck there. (This may be in conjunction with starting in New Vegas while having the "Your New Hell" mod activated, then deactivated upon returning to New Vegas, however I am not sure of that.)
If the game does this, you lose all the items you have gained before, including caps.

Is there Stealth Boy have sound effects?
Top

- the really game breaking bug being unable to buy a ticket to Nevada.

- when you enter Union Station by the very first door after killing the super-mutant and centaur, there are two cockroaches and the middle and right door are destroyed and down. Omegle Tv There's also a functional door that opens and close, but I think there's a colision problem, because you can open but not move through it and also the super-mutant and centaurs can't pass through it (to attack you). You also can't shoot trought it, it's like there's a invisible wall.

- after Doc Mitchell says "I see you out" and the message "your equipment was returned to you", he don't say the first dialog, it's mute.

Projectile tracers (think thats the term ome tv) are missing when using the Chinese assault rifle.
Having quite a lot of dead body bugs, some get stuck with their arm in the air and/or spinning weirdly.
Top

There's a hotfix for the animations in the technical help sub. This will fix the hanging wrist issue.

Can't fix the terminal misspellings for the minigame, these are hardcoded and the data is compressed inside the game executable and can't be altered.

The dialogue and doctor bugs are known and fixed for 3.3.

Mods that mess with the start up quests are incompatible, we're not concerned with mod incompatibilities.

A couple rolls of Duct Tape and a Brahmin Skull in Craterside Supply have no owner.

Coolant Components and Garden Hoses are only valued at one cap, in contrast to other similar Misc. items; they at least can net a few caps if you're not either using them to craft their single recipe or shoot them out of a Rock-It Launcher.

The reactor dialog box/menu/whatever for the Union Station quest is rather lacking in punctuation.

Union Station door with reference ID xx012964 needs to be set as inaccessible. If I remember right it opens into a void or a wall or something.

The loading screen about Union Station passengers needs a comma in "42000".

Aid items + recipes for the "Bloat Fly Smoothie" and "Steamed Rad Roach" should say "Bloatfly" and "Radroach" instead.

This one may be extra pedantic and debatable, but I think "Out of this World Pie" would be better off as "Out-of-this-World Pie".

Hatchling Mirelurk Meat has a starvation value with conditions that can make it visible outside of hardcore mode.

BeamChallengeWeaponLIST formlist includes the Pulse Gun, despite the challenges it's used for stating they are for rifle-type weapons.

The rest of these are purely New Vegas records untouched by TTW, so let me know if there's a better place to report them for them to make it into YUPTTW or whatever:
SpoilerShow
"Yum Yum Deviled Eggs" recipe for DM vending machines should not have "Yum Yum" spaced out.

Dino Bite Storeroom Key(scripted misc. item, not actual key) needs pickup/drop SFX(yes, you can hear them in the barter menu)

The Intelligence check for busting Orris (editor ID VFreeformFreesideVFSOrrisTopic006) could use some better punctuation in its prompt: "Hey you only fired three shots and there are four guys there..."
Top

I've seen the spinning body issue but only a couple of times, no idea what causes it at this time.
Top
Post Reply
462 posts