I have another question, during the resurrection of fresca I got dom atomic as a worker in lollipopz. I wanted to do it again but I don't know how it happened the first time. was this a glitch? I know I am showing ignorance but that is why I am here, asking people who know. thanks for this mod and thanks for any help you may have.
Top

Remind me who Dom Atomic is. I played and finished this mod in 2018 so I might remember if you jog my memory. Tho I played original non TTW version but it should not matter I think.
Top

He is one of the actors who worked with fresca coy. someone else told me i have to let handy listen all the way through the head set to get him. you combine him with cara and it becomes caradom in one of the templates. thanks for the reply.
Top

I don't intend to annoy anyone but the post just above is answered by the second reply. Thank you for debugging mods and modding (if you do)

RoyBatty wrote: ↑
Thu May 23, 2019 5:49 pm
Well it's not that way anymore because that's just impossible to maintain without the game being buggy as fuck in one wasteland or the other.

TTW moved to being a total conversion, so these issues can be solved. Mods needs patches or to be updated to work with it. It's generally voicetype checks that need to be fixed.

I know it's a long shot but I don't suppose there's anybody currently working on a 3.3.1 conversion/update?
Top

Does this version still work with TTW 3.3?
Top

I realize this may be a necro post and in the wrong location but I have a dilemma.

I am using a TTW3.3.2 self-converted FO3 follower (Jessi Companion V4b5) that is relaxing (triggered by this mod: Chill Companions 1.3 in the cesLolipopzFloor3 CELL. She has repeatedly run into the shower and locked up my game. Hardlock the instant she collides with the showerTrigger shown selected here: 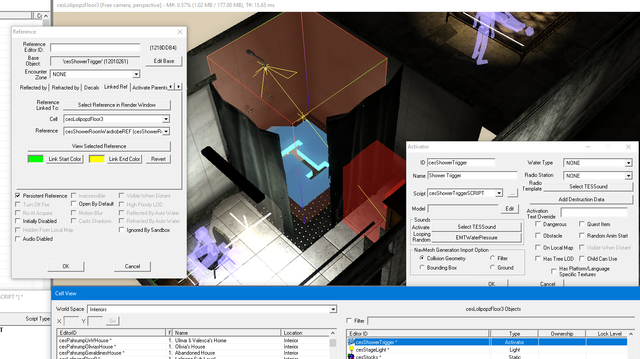 Initially I suspected a broken/missing Nif (as you can see, the shower is initially disabled) but realized those were vanilla assets and less likely to be at fault. Reflection got me thinking maybe the SCRIPT attached to the shower trigger was to blame. At any rate, here is the cesShowerTriggerSCRIPT:

At OnTriggerEnter, Jessi != Player, shower != InUse, Ref's are linked and BAM! the shower is enabled. Near instant the moment she collides with the trigger. Looks more and more like a Nif issue. Unless....unless. Just maybe. Jessi is broken (probability > 9000) or the idle mod conflicts. Regardless, I forsee many hardlocks in my future to find the culprit.

update: Jessi has, by default, a slave collar & pipboy equipped iirc...checking now ingame. Could be an unplayable item causing the issue as I have since tried with Willow and she deposited her inv to the container and proceeded to bathe, albeit fully clothed in her default outfit.
Top

I don't use this mod and haven't looked at its scripts, but in general, if I suspect a certain piece of code to cause a crash, I'll insert some debug output to the code to find the exact line that is causing the crash. Debug output should contain the exact location in the script and the content of related variables or refs and it will be written to ConsoleOut.txt, so I can look at it after the crash. Once I know where the script crashes, I can check what might be causing the crash and decide on some script changes to verify my guesses.

In your particular example you could comment the code that removes the items and see if it still crashes. Also check what happens in quest cesGOSUB in stage 10.

Btw. I wouldn't modify the mod itself to test things out. Create an override mod and test there. Once you find the solution, you can easily port the required override mod's changes back to the original mod using FNVedit.
Top

Thanks for this and the Quo Vagis conversion!

Does anyone have a Text based Walkthrough of the quests for this?
Top
Post Reply
40 posts