﻿Note: This mod contains no meshes or textures. Nivea's Spice of Life is 100% necessary.

This is literally just a script to inject into leveled lists, and a quest to trigger the script.

Spice of Life is NOT my mod, and I would never dream of claiming such.

I love Spice of Life. It's a nice mod.

It's also one of the only ones I know of that includes a variety of backpacks that are distributed to the various
occupants of the wasteland.

That last line alone was enough for me to want to do this.

HOWEVER, I am not certain I covered all my bases. If something seems off, or you take a look at my script and see something missing, please
share in posts or bug reports (on the nexus). I have posts set to give me notifications (on the nexus), so I will see all your responses. Though,
to be fair, this does not mean I will get to them. But rest assured, the little bell in the top will be yelling at me
that someone said something till I look at it.

As of now, I'm only sure I added into the Raider level lists. Interestingly, though, I would rarely see Megaton settlers
and wandering scavvers wearing Spice of Life clothing and helmets long before I even considered this script.

Also of note: I added the Spice of Life items to LootArmor1-5 to also integrate them into the
vendor level lists. Nivea added them directly into the vendor's chests, I think, so I was unable to add them in, in the
same fashion.

I did, however, leave out the Zombie Land outfit, as it appeared it was supposed to be special/unique.

Load this mod AFTER Spice of Life in your load order.

If you would prefer to use vanilla bodies, I recommend Jokerine's Spice of Life Vanilla Bodies Patch﻿, located
under Apparel on her website. 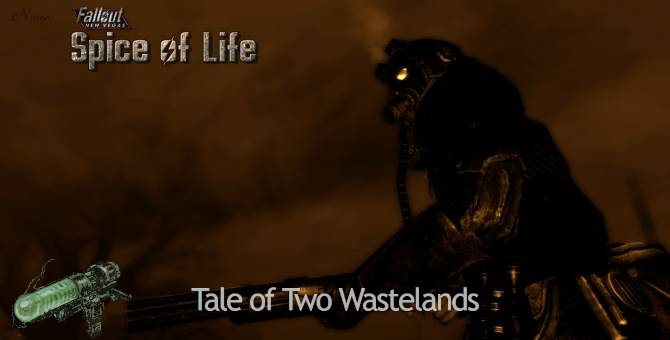 Also included under Optionals is a patch for Killerfurball's Armor Revamped

I also have a few other TTW mods on the Nexus, though I don't want to spam mod releases with my content.
Here's a link to my releases. Anything here that says TTW requires it. Everything else does not.
Top

Be aware this mod undos many fixes and will probably not work correctly with newer versions of TTW.

I just loaded in Spice of Life and used JIP LN NVSE to script the spice of life armors into your LL.

Did I do something by accident I didn't realize?
Top

I don't know anything about the Spice of Life mod. But I think that's the one Roy's talking about (Spice of Life), and not your one.

Thanks for this patch, it really helped me out
Top

so is it okay to use this modified esp or not?
and which one is roy talking about
Top
Post Reply
6 posts • Page 1 of 1