I'm having a similar problem to Sivboi: On the map screen the quest markers, player marker, and follower markers are all tiny. All the other markers are as they should be. The crosshairs are also tiny but I honestly don't care either way about that.

So the proposed solution was to delete texatlas from the textures folder, but I can't find it. It's not in Darnified_UI-15-20190716\textures, nor in Fallout New Vegas\Data\textures. I even ran a whole computer search and nothing came up. I always have "view hidden items" checked so I know it's not that. I also reinstalled to mod using the version linked to in this thread, but still can't find it. 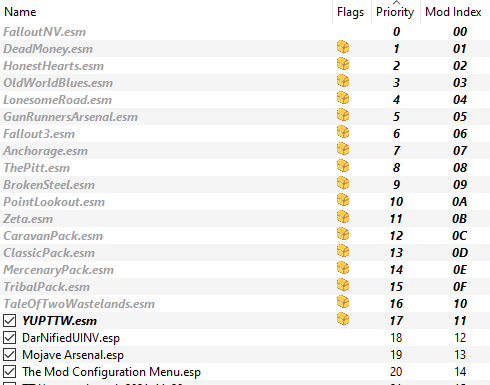 The last mod that got cut off is my merged patch made in FNVedit. DUI was the first mod I added after getting TTW running (using The Best of Times, I'm certain I followed that guide to the letter) and the issue came up immediately, so it should have nothing to do with Mojave Arsenal or MCM.

Lastly something that's probably not useful but may be of interest: The affected markers and crosshairs were all a few pixels to the left of centre at the start. This was most noticeable when using scoped weapons and ironsights. When I got rid of interfaceshared0.dds in the DUI textures folder though it all moved back to where it should be.
Top
Post Reply
111 posts