The Falcon TTW with Sortomatic

The Falcon TTW with Sortomatic 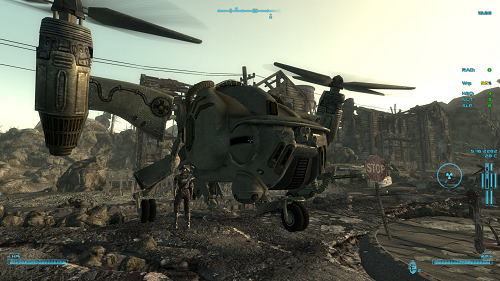 Moderator note: the conversion author has moved hosting of the mod to nexus, and further discussion will be done on the thread there.

The Falcon is your own personal vertibird, which allows you to travel to 64 locations in both the Capital Wasteland and the Mojave. You can call it to your location, create and deploy robot soldiers, and store your gear with integrated Sortomatic storage. The Falcon can be found on the roof of the Repconn HQ in the Mojave.

Requirements:
CommandsShow
-- Hail Falcon --
Selecting this command will summon the Falcon to the Test Pilot's location.

-- Deploy Guard --
Once a Guard has been selected via the Guard Terminal inside the Falcon Hold, this command will become available via the remote control. This will summon the Falcon to the Test Pilot whereupon it will deploy the selected Guard. One of eight robotic Guards are available.

-- Waypoints --
This command will allow the Test Pilot to plot up to 8 Waypoints which the Falcon can be ordered to travel to later. The locations will be uploaded to any GPS capable device the Test Pilot may have; such as a PDA or a Pipboy.

-- Select Guard --
Once a Guard has been selected via the Guard Terminal inside the Falcon Hold this option becomes available via the remote control. This will enable the Test Pilot to select the type of Guard required while in the field.

-- Set Home --
This command will plot a new position for the Falcon to return to when not in use. The default home position is the Helipad on the roof of the Repconn HQ.

-- Information --
This command will offer reading material pertaining to the project.

Once the Falcon Pilot Program has been initiated the remote control will have access to the new options listed below.

-- Retrieve Team --
The Falcon will retrieve any Team members or companions who may be waiting elsewhere. They will be asked to wait in the Falcon's Hold.

-- Deploy Team --
The Falcon will deploy any Team members waiting in the Falcon's Hold at the Test Pilot's position.
GuardsShow
The creation of Android Guards requires raw materials for atomic realignment. Any scrap metal and scrap electronics should be placed inside the Android Component Store. Each created Android will use 2 loads of each. When destroyed only 1 of each load can be teleported back. So continued use of Androids will require a continued supply of scrap metal and scrap electronics.

Once a Guard has been selected using the Guard Terminal inside the Falcon Hold; the Test Pilot can order the Falcon to deploy the Android Guard at their location. Due to their obvious interest in this project the Military have agreed to let us use some of their robotic schematics. The Falcon uses the teleport device to manipulate the atomic structure of matter stored in the Android Component Store. This enables the instantaneous construction of these Android Guards on site. Upon destruction (or when given the order to Deactivate) the Guards will be teleported back in to the Android Component Store where a fraction of their components can be used for later Android construction.

There are 8 types of Android Guards available for deployment, these can be viewed in the Guard selection menu. 7 individual types can be selected or a team of 8 which will include a Heavy Gunner; the only Guard type which can't be chosen individually.

All Android types can be given individual orders, be aware however that although many of the same type of Android can be created, a single Android type will follow the orders given to one of their number. For example: If you have 3 Ranger type Androids following you and you tell one of them to patrol the area, the other Ranger types will also patrol the area.
FuelShow
Though many of the Falcon's systems are powered by nuclear fusion, fossil fuel is still required for flight.

Accurate fuel gauges are on display in the Falcon's cockpit.

The Falcon uses high octane fuel, similar to that used as ammunition by flame throwing weaponry.However, to ensure versatility the Falcon will also use any homemade flame thrower ammunition as a backup resource.
On any given flight,(taking into account the Teleportation facility) the Falcon will use up to 5 units of fuel. Both fuel levels and the amount of parts for Android construction in storage can be checked by pressing the -- Fuel & Parts In Storage -- button on the General Information screen; accessible from almost every terminal including your remote control.

Should the Falcon be run entirely empty of fuel it will either travel back to Repconn HQ, its assigned 'Home' location, or at its current location. It is therefore important to ensure a conveniant 'Home' location is assigned in advance.
Bobbleheads and SnowglobesShow
If you have stored Bobbleheads in Megaton or Tenpenny's Tower they can be displayed in the Falcon hold. Any previously displayed in either vanilla player home will also be displayed along with new ones. It is worth knowing, however that if you display new Bobbleheads in the Falcon you will not be able to display them in the vanilla homes. So if it's important to you you should first display them in your vanilla home and use the Falcon display afterwards.

DLC Snow Globes work differently, so after discovering the DLC locations you should revisit them with the Falcon. This will display the Snow Globes here
regardless of whether you have found the actual DLC Snow Globes. Sorry about that, but there is no way to track the display of the DLC Snow Globes so this was a compromise.
CheatingShow
In the General Information section of most Terminals (including your remote control) you will find an -- Extras -- button. This will take you to a Cheat screen with several options:

Note: Do not cheat the Falcon into the Capital Wasteland without visiting the Mojave at least once, or it will break your New Vegas quest!

JNF makes an awesome mod. I love the JNF Blaze at the Robco Facility in Fallout 3. I recommend you check it out and I HOPE he gives to ok to do a TTW conversion.
Top

why shouldn't we use the original link? they say they have a patch out for TTW 3.2

edit: it says remove plugins just keep assets for st robot race. If I use mod manager should I just install and then not enable the plugins?
Top

Can we go ahead and use the Robot Companion and Robot plugins if we want to? Will it cause any issues?
Top

just download the file manually, extract it, remove the plugins (esp,esm) then make it an archive again if you wish and put in your mod manager or just move the files manually.
Top

New update that fixes an issue with the esp.

will it be on the nexus site?
Top

Moderator note: the conversion author has moved hosting of the mod to nexus, and further discussion will be done on the thread there.
Top
Locked
10 posts • Page 1 of 1