General help and technical troubleshooting. Ask for help here if you can't find an answer in the FAQ.
Post Reply
9 posts • Page 1 of 1

Hello for some reason when I load fallout new vegas edit I don't get the option to load any of the TTW stuff or any fallout 3 stuff, its very wierd as I followed the instructions correctly I can load up fallout new vegas content no problem just TTW and fallout 3 all I want to do is to add visor overlays to the fallout 3 power armor (mainly outcasts) is there something I'm doing wrong and I do have the conversion pack in the correct spot.

I'm a little confused? Are

I'm a little confused? Are you saying that when you launch FNVedit you can't see the FO3.esm's or the TTW.esm? Are you trying to convert a FO3 mod to TTW 2.0?

Does TTW run for you? Meaning can you play the game?

Post a screen of the FNVedit load screen and, more information about what is going on.

Kinda what I thought. If the

Kinda what I thought. If the TTW files show up in FOMM/ NMM you should see them in xEdit, even if they're unchecked by default. My guess is either you're running xEdit without making sure TTW.esm is checked and load order set like it should be. TTW takes about a minute to load into xEdit for me; and I'm like Chuck- No way you're playing TTW and it's not showing up in edit. The Conversion pack goes in the folder you put xEdit in.

So yea grab us a screenshot when you get a chance and double check your load order and that TTW is  enabled.

Yes I can play TTW it just

Yes I can play TTW it just dosent show up on FNVedit but I belive I found the problem it may of been that my fnvedit was loading all the plugins from my back up fallout new vegas in my steam folder and not the one in my documents so i'll delete the back up and reinstall FNVedit fortunately the posts you guys put reminded me so thanks.

Edit: It seems to work now thanks.

Yea for anyone that comes

Yea for anyone that comes across this here's a reference for you: xEdit doesn't install. Extract and run. It finds the folder New Vegas is installed in by looking at your registry. The best thing you can do as far as I can tell is install a fresh New Vegas, rename the folder to New Vegas 2, Make a new folder for New Vegas and copy all your files over. Rename whichever one you want to use to New Vegas and the other to New Vegas 2. This way no matter how many copys of the game you run concurrently your only running them from the right folder, thus all file settings stay the same. Install FOMM in your Docs and do the same with it's files and you'll have fully controlled mod databases for each version you choose to have.

I'm new to playing with mods, I've tried to install FNVedit but had the same issue as the OP. Please see images (gonna spoiler them to keep post length short)

I copied this guys method first, https://www.youtube.com/watch?v=MFynNMHGQiY but got uncomfortable with renaming files and the versions were different, so downloaded the Nexus copy 4.02 of FNVEdit. Reinstalling them a few times, and hooking up to MOD2 has seemed to cause issues. 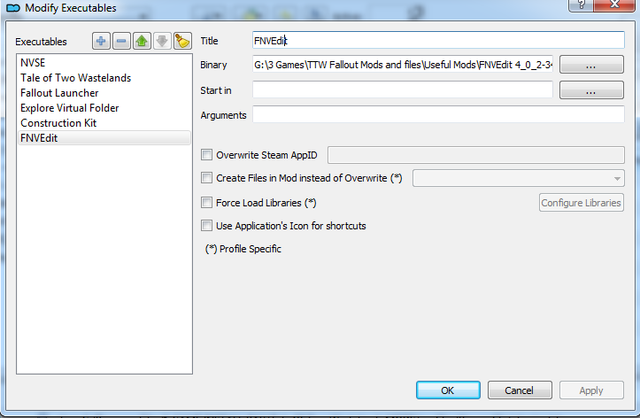 Essentially only FNV esm are appearing, and FNVEdit seems to be frequently getting errors. - A guy on youtube comments above had the same issue, but his FO3 esm were appearing when fiddling with game/MOD2 on or off, mine doesn't:


Tony
I'm trying to create a merge patch for TTW and my mods without any luck after following this video. How do you get all of the TTW .esm's and mod .esp's to show up in FNVEdit? It currently only shows the Fallout NV master files in the Steamapps/common folder while my TTW directory is in my games folder. If related, I'm using MO2 thanks to your installation video!

GamerPoets
Hey Tony = )
"How do you get all of the TTW .esm's and mod .esp's to show up in FNVEdit?"

That's what this video shows along with installing the scripts. How to set FNVEdit up for TTW. I would just be repeating what is shown. If you are using MO2 the TTW install should not be in the game folder. The TTW Install video shows to install TTW (all of the output from the installer) to MO2's "mods" folder.
-Michael


Tony
@GamerPoets Thanks for the response! I went back and watched both videos just to be sure I had everything correct, still without any luck getting FNVEdit to work. Sorry I didn't specify that my MO2 mods are in my drive games folder, not my steam Fallout NV folder, as the video explained. After several hours of testing, I figured out the strange issue. I turns out everytime I launched Fallout TTW from MO2 and then exited the game and returned to MO2 to launch FNVEdit, FNVEdit would only display Fallout NV base files. In order to get all my TTW and mod files to show up in FNVEdit, I had to close MO2, reopen it, then launch FNVEdit. I have to do this after everytime I launch my game. Strange but I can live with it!

GamerPoets
No worries.
Do you have more than one version of xEdit installed? Sounds like the paths are getting crossed some how. I had issues like this before with different xEdit versions installed (not that you can't have more than one... just can't remember why this happened because it's been so long). Do you have different installs of MO2 or different shortcuts to the same executable? At least its working doing what you are doing. There is an xEdit discord. Might be worth checking out. If you come to my Discord (channel banner) i can link it.
-Michael

Thanks for anyones time and suggestions in advance!
Top

None of your pictures appear.

If you're using Mod Organizer 2, you need to run FNVEdit from within MO2 to get the mods to load. Create a new executable in MO2 that is set to run FNVEdit, then run that from the MO2 launcher the same way you launch the game itself inside MO2. I run FNVEdit and GECK just fine inside MO2 this way. 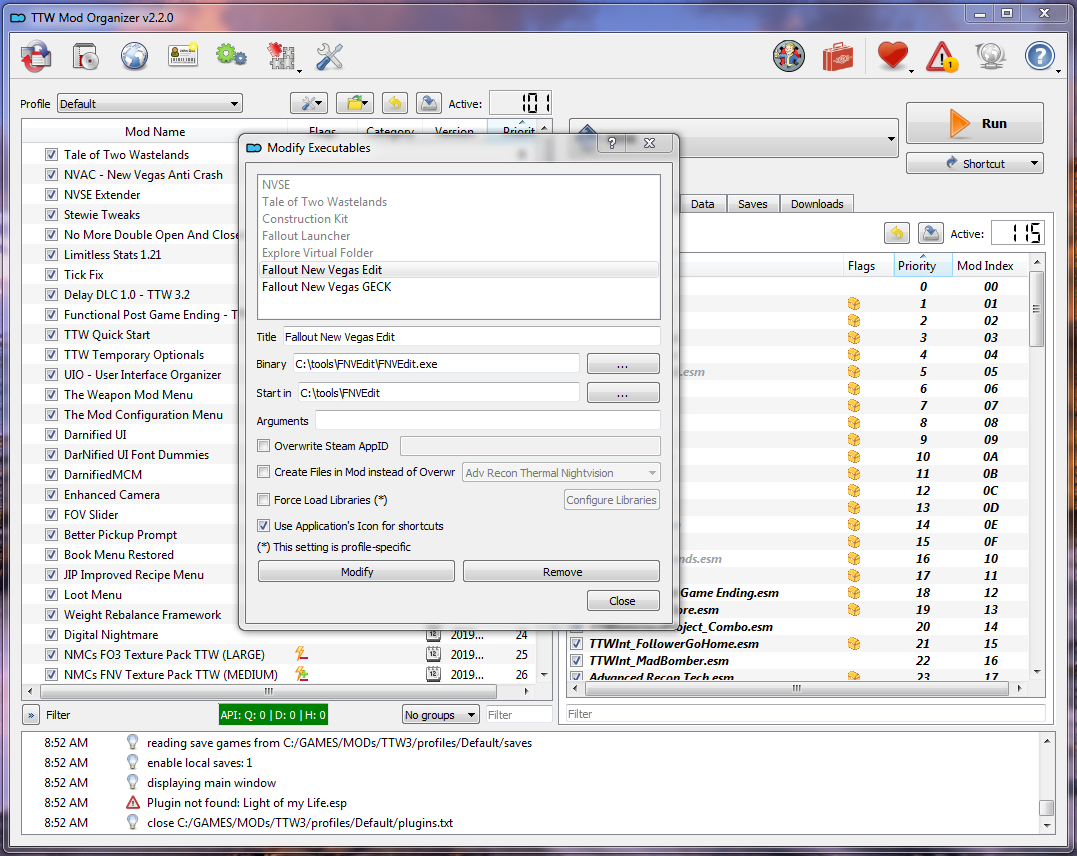