Have something to say about Tale of Two Wastelands or have an idea for a new feature? Let us know here.
Post Reply
21 posts

Sorry if this is not the right place for this but I just wanted to provide some feedback about how assault rifles and their variations have been buffed in TTW.

You will notice that the Assault Rifle not only does more damage per shot, but it is twice as accurate as the 9mm SMG outside of VATs and 5x as accurate in VATs. It also has access to AP ammo which negates DT on almost all enemies in the game (most importantly, talon mercs, super mutants, all robots and deathclaws).

Once the player gets access to sufficient quantities of 5.56mm AP ammo, they can just hold down the trigger on the assault rifle and slaughter their way through hordes of super mutants and talon mercs in the DC area with ease, while all SMGs are negated by the DT system. It is extremely powerful and makes most other weapons at the same level irrelevant.

At the guns 25-50 level for example, the assault rifle with AP ammo and a dps of 144 is superior to all shotguns (single shot, caravan, sawed off, lever action), all SMGs (9mm, 10mm), all pistols (unless you really need a silenced or holdout weapon) and most other rifles (unless sniping at extreme range with the laser or hunting rifle).

The comparison between the assault rifle and NV SMGs are particularly bad, the SMGs are all extremely inaccurate, have very low VATs chance and cant use AP ammo. There is no reason to use the 10mm SMG when you can use an AR with 5.56mm AP ammo instead, which will shred super mutants, talon mercs and sentry bots. For comparison, the 10mm SMG has a spread of 2.2 (nearly 3x that of the AR) and a vats chance of 8% (nearly 1/6th that of the AR).

IMHO, the main issues are :

-The AR is way too accurate compared to other automatic weapons at the same level, it is also much more accurate than the NV Assault Carbine which requires gun 75 (the closest thing NV has to the AR). For comparison, the assault carbine has a spread of 1.2

-The AR's DPS with AP ammo is too high compared to non-automatic weapons. Most automatic weapons in NV have a high DPS because they can't use AP ammo and get neutered by DT, this is not an issue when you have access to 5.56mm AP rounds. The 10mm SMG does only 36 DPS against a target with 15 DT like a super mutant for example, because it cant use AP rounds. The only automatic weapons in NV that can use AP ammo all require guns 75 or above, where you are expected to fight end game enemies like super mutants at black montain, death claws, etc.

I think the assault rifle, chinese assault rifle and infiltrator should be re-balanced with other weapons in the same skill range, using an AR with AP ammo in the early-mid game is like having a mini LMG that can mow down super mutants with ease.
Top

The majority of players usually complain that those weapons are too weak, specially compared to how they perform in vanilla FO3. It's unusually refreshing to find someone with a different opinion.

Weapons are being rebalanced for a while now, hopefully TTW 3.3 will already have all the weapons rebalanced.
Signature:

The weapons also must function correctly in VERY HARD where they do 1/2 damage.

What difficulty and difficulty mods do you play on? I use bleed, very hard, hardcore and I find that getting alot of AP ammo is pretty hard. I don't game vendors though I like to play the game on its own terms. If they dont have it i dont wait ect
Top

jsawyerbatty, bleed, very hard, hardcore, get AP from the outcasts

The assault rifle is a common low-level weapon in Capital Wasteland. I would argue that in that role it it's more worrying if it DOES work well against the toughest(non-unique) enemies in the game, especially at the hardest difficulty.
Top

The assault rifle is a common low-level weapon in Capital Wasteland. I would argue that in that role it it's more worrying if it DOES work well against the toughest(non-unique) enemies in the game, especially at the hardest difficulty.

Roy said the weapon must function correctly, not do well.

So in vanilla TTW, normally, the Assault Rifle is not as effective against Albino Radscorpions as the vanilla Fallout 3 one. This is intentional, since TTW has AP ammo, which if used the Albino Radscorpion will fall as fast as in FO3.

If you can buy ap ammo, sure you can kill supermutant with ease. But cheaply, no. I can kill sm at level 10 uninvested in combat skills but only with some very very high price.

--------
Of course, by level 20, normal rifle doesnt really work that reliable in close quarter. Sniping from afar, yeah. From stealth status, yeah. But not direct face to face. Not even against Giant scorpion, let alone deathclaws, ghoul reaver or SM overlord. For that you need LMG, or Gatling Laser, or Minigun, all Guns 100 and with AP ammo.

Even fighting with skill 50, half the req for those guns, them big guns did make for a reliable last resort.
Top

I checked in FNVEdit and I noticed the amount of spread is actually heavily reduced to the point it's different on how the original weapon in Fallout 3 functions. This also effectively renders the Infiltrator's mods, both of which are spread reduction mods pointless since it already has spread so low it's essentially a fully-automatic sniper rifle.
Whoever thought of this idea apparently didn't seem to do a lot of playtesting. 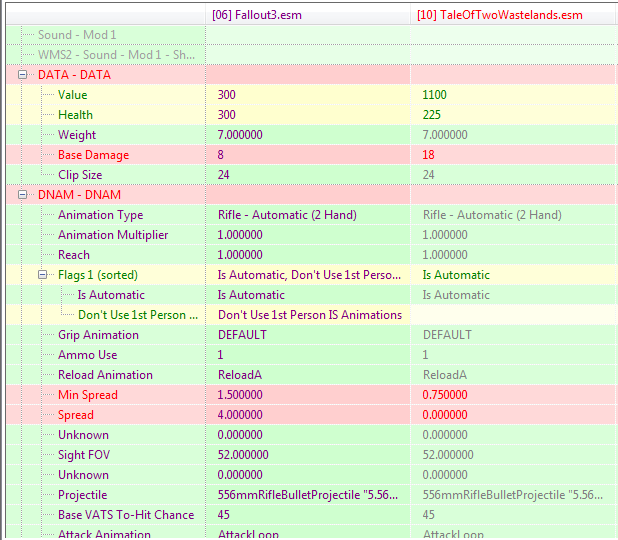 Return to “Tale of Two Wastelands Suggestions Questions and Feedback”